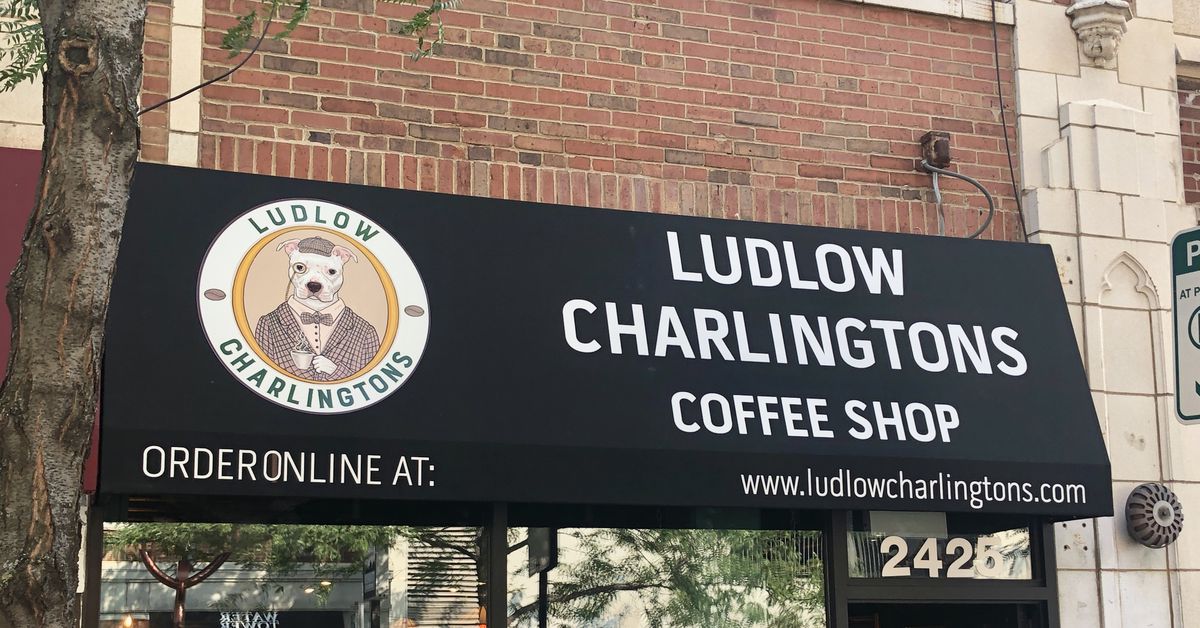 When Naji Al-Anwar and his future wife Lauren adopted their pit bull, Cora, in 2019 at Chicago Animal Care and Control, they noticed the shelter was understaffed, underfunded, and underrecognized. When Al-Anwar decided to leave his job as a freelance sound engineer and open a coffeeshop in early 2020, he thought about the shelter and decided he wanted to help. And now, after many pandemic-related delays, the shelter dog-themed coffeeshop, Ludlow Charlingtons, has debuted in Lincoln Park.

Ludlow Charlingtons, which opened on Monday, is what Al-Anwar calls a more traditional, European-style coffee shop. There are no blended drinks or flavored syrups, only straight-up brewed coffee and espresso beverages and French pastries. The coffee comes from Counter Culture and the pastry from La Fournette. The name started as a joke between Lauren and a friend, who imagined their own dog bar, but it took on a life of its own and inspired the old-fashioned English pub decor, with dark woods, beamed ceilings, and stained glass lamps. The cafe is small, just 800 square feet: there are two four-seater tables and 11 counter seats. Unlike in the Victorian era, there is also Wi-Fi.

At the moment, dogs are not allowed inside the cafe, but Al-Anwar hopes that they will be someday, once he’s better able to understand city rules. There will, however, be a dog-friendly outdoor cafe in the near future, and there is always a bowl of water outside for dogs walking by.

The mission of helping the shelter dogs, though, has already begun: Al-Anwar has been working with Friends of Chicago Animal Care and Control, a nonprofit that raises money and organizes volunteers to help out at the shelter. “I started talking with Charlie Propsom, the founder of FCACC,” Al-Anwar says, “and within five minutes of speaking with her, I realized how passionate and into the cause she was. She threw out 20 different ways we could work together.”

Ludlow Charlingtons currently offers a line of merchandise bearing Cora’s image, with 50 percent of the profits going to FCACC. And a dog adoption event outside the cafe is tentatively planned for early September.

Chicago Animal Care and Control’s shelter in Little Village takes in an average of 15,000 animals every year, though that number was much lower in 2020, closer to 11,000. The majority of the dogs and cats that come in are either adopted directly or transferred to other shelters, but last year, approximately 10 percent of the dogs were euthanized. Jenny Schlueter, a spokeswoman for the shelter, says that while the shelter had fewer animals last year, it didn’t experience the same pandemic puppy adoption shortages as private shelters and rescue groups. But as things have returned to normal, the shelter has filled up again and they appreciate any help they can get promoting adoptions.

That is what Al-Anwar is trying to do. “At the shelter [when we adopted Cora], we saw all these dogs, mostly pit bulls. It was very sad. It’s an understaffed place. It doesn’t have great funding, and it doesn’t have great recognition like PAWS. We wanted to give back to that community.”