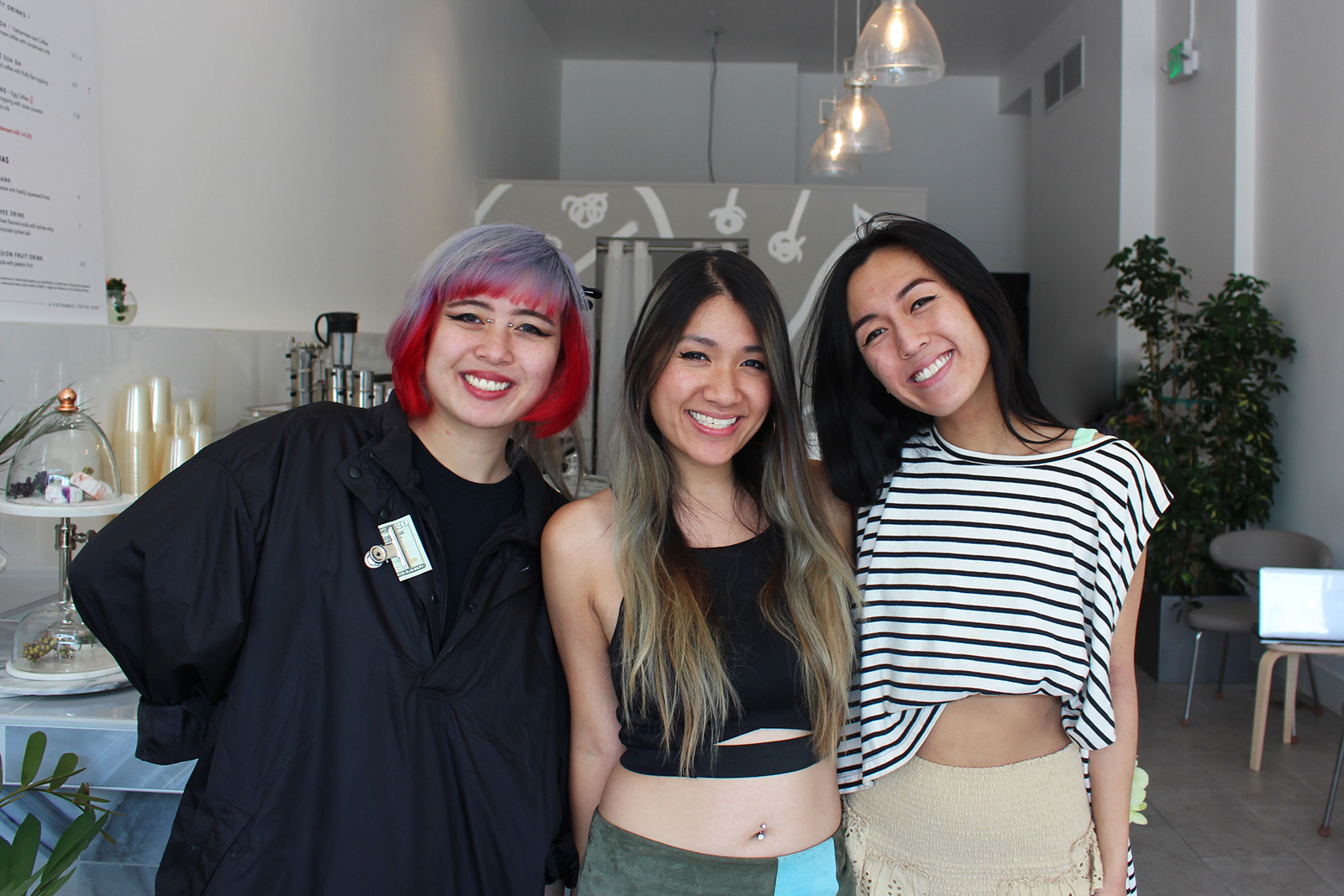 Even before the first sip, waiting in line at Tí Cafe is a multisensory experience: smelling dark coffee slow-dripping through rows of silver coffee filters; watching Vietnamese music videos play amidst a multimedia art exhibit near the window; and listening to the Nguyen sisters laugh as they bustle behind the bar, taking orders and making drinks.

Sashaline, Shominic, and Shasitie Nguyen opened the café together in June, and by doing so, realized a dream they’ve shared for as long as they can remember.

“We always wanted to open up our own business,” Sashaline says. She attributes that collective desire to their mother, Kristy, an esthetician who managed her own nail salon as she raised her daughters in Dallas.

The sisters were close growing up, but running the café has brought them even closer. Sashaline, the eldest, manages operations and arranges the café’s colorful bouquets; Shominic, the pink-haired middle child, handles all things branding and aesthetics; Shasitie, the youngest, shares operations responsibilities and perfects the recipes. Working together is wonderful, they say, because they can disagree, fight, and make up without wasting time on apologies or grudges.

The Nguyens’ familial bond is fundamental to the cafe’s DNA. Design elements include doodles of little creatures the sisters made when they were kids and Kristy never threw away. The café’s name—Tí—is a Vietnamese term of endearment, akin to “little ones.”

Most importantly, their bond is apparent in the food and drink. Good coffee was part of their childhood, Sashaline says, as it is for many residents of Vietnam’s Hanoi and Ho Chi Minh City, where there’s a coffee house on practically every block. But after the sisters moved to Denver, they realized the only place to get a genuine Vietnamese brew was in pho shops.

To change that, the Nguyen sisters channelled their memories of quality coffee and extensively researched Vietnamese café culture (a process that included watching lots of Vietnamese food vloggers on YouTube). They settled on a lineup of brews made from low-altitude-loving Robusta beans from Vietnam. The Robusta variety is nuttier and more caffeinated than Arabica beans you’ll find at Starbucks and most other stateside cafés. Western connoisseurs have tended to dismiss Robusta as lower-quality, but Sashaline believes in the bitter beans.

“We use a phin, a Vietnamese slow drip filter with hot boiling water, so that the flavor is strong and bold,” she says. If you take it black, that means the coffee tastes more coffee-y; or, if that’s not your thing, the Cafe Sua Da and Cafe Sua Nong offer a reprieve in the form of condensed milk, iced, and hot, respectively.

Then there’s the Cafe Trung, a luxurious egg coffee that’s a specialty in northern Vietnam. Sashaline says people have compared its flavor to that of a Cadbury Egg, or a tiramisu. It’s reminiscent of caramel, though the sisters swear there’s none in their secret mixture (it’s mostly egg yolk frothed up with condensed milk and cacao powder). The drink arrives in two layers, the coffee on the bottom and the froth on the top; as you mix them together, the color lightens and the mouthfeel becomes velvety.

As the sisters planned the café’s concise menu, they wanted most drinks to stay true to their ancestral traditions, but they also gave themselves license to experiment and innovate. Enter the Flan Cafe Sua Da, an iced coffee with three miniature disks of flan floating on top. Customers are given a boba straw to pierce through the flan; and with each slurp, they get a sweet, custardy morsel, then a rush of cold, refreshing coffee. It’s genuinely fun—almost interactive—like something Willy Wonka might have dreamed up.

Lychee fanatics will fall hard for another one of their inventions: a translucent pink lychee soda topped with lychee-infused whipped cream and two whole, white-chocolate-coated lychees.

Tí Cafe’s  selection of baked goods follows the same formula as its drinks—some traditional, some unique. They source nearly all of their pastries from three bakers—all Asian women—who prefer to operate anonymously out of personal kitchens and distribute confections to businesses across town. Some of the options, like red bean sesame balls and macarons, are typical fare at Asian bakeries around Denver and, as such, are typically delicious.

The Banh Pate Chaud, a puff pastry pie brimming with a made-in-house pork filling, recalls the richness of a shepherd’s pie and the herby goodness of soup dumplings. Sashaline also commissioned her bakers to create a taro Snowskin Mooncake, a rice-flour-based, dairy-free, mochi-like confection that, unlike glutinous mooncakes, can be molded into delicate flower patterns.

Since Tí Cafe has opened for business, it’s been invited to collaborate on pop-ups with organizations like Not Yo Mama’s Cupcakes, participate in events like The Colorado Dragon Boat Festival in late September, and even cater weddings—an auspicious first month and a half.

During business hours, it’s not uncommon to see fellow Asian-American foodies dropping off treats at the café, like the sisters’ new friends at Sharetea—a Taiwanese boba shop with four outposts in the greater Denver area—who drop off a free tea for them on occasion. The sisters say that offerings of community like these have been a wonderful surprise, and they’ve been spoiled by and are extremely grateful for the generosity of Asian-American restaurateurs across the city.

The sisters say they are also impressed by the way non-Vietnamese people have engaged with their offerings, trying admirably (if not always successfully) to pronounce the Vietnamese drink names.

Indeed, Shominic says that one of the biggest honors of opening the café has been seeing their made-with-love drinks convert American customers. “When it becomes their everyday coffee—not just a one-off specialty, but their favorite regular item,” she says, “that’s cool.” 30 N. Broadway