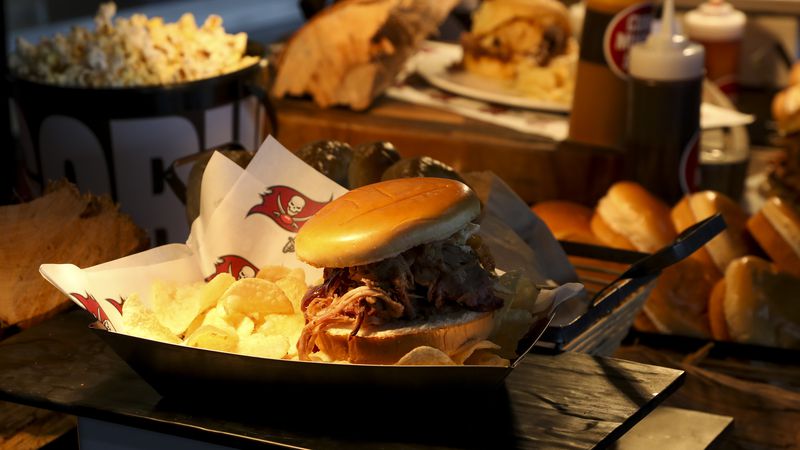 On Wednesday, the Tampa Bay Buccaneers debuted a long list of new dishes and several new food and beverage vendors at the Tampa stadium, including an in-house barbecue concept, Cannon Fire BBQ, and a high-end, all-inclusive seating lounge for fans.

The menu has undergone several changes over the years. In 2019, the team ended their contract with global food service company Aramark, which had supplied the Buccaneers with concessions since 2013. Before the 2019 season, the team announced they had signed on to a multi-year deal with New York-based concessions giant Legends Hospitality and hired executive chef Jason Choate to create a menu for the stadium’s Local Eats program, with dishes like ropa vieja grilled cheese and brisket sandwiches.

Choate left the company shortly after Super Bowl LV in January and, in June, Legends brought on Tampa native Brent Lewis. (He was working with Marriott Hotels in Atlanta at the time and was previously the executive chef at Amalie Arena from 2014 to 2019.)

Legends General Manager Orazio LaManna said after the team’s successful season, it was clear the company had to up its game.

“Knowing that we were going to have a sold-out year, we knew we had to be better prepared and better organized,” LaManna said Wednesday. “Cooking for a championship team, we had to have the best of the best.”

Revamping the menus was a months-long process, in which LaManna and Lewis got rid of some dishes that weren’t successful and added roughly 45 dishes to the stadium’s various concession stands.

Hall of Fame club members will find a new menu every week inside the swanky, upper-level lounges, including dishes like seared scallops served with a peppery Florida corn salad and garnished with micro greens.

Hall of Fame club attendees will also find that pandemic protocol has prompted some changes to service. Where guests would formerly serve themselves on a buffet line, a small plate service where guests can pick up already plated dishes has taken its place.

Wednesday’s reveal focused on the team’s new restaurant partners. Along with returning food concepts from PDQ, RumFish Grill and Dunkin’, the team announced they were adding several others to the mix, including Aussie Grill (a fast-casual Outback Steakhouse spinoff from Bloomin’ Brands), Little Caesars Pizza and Winghouse. New beverage concepts include Tampa-based Coppertail Brewing Co. and a hard seltzer bar from Vizzy.

Champions Lounge, a new, high-end seating area inside the East Stadium Club, will feature an all-inclusive food and drink program, including a craft cocktail bar and multiple food stations.

All of the new dishes, drinks and amenities will be available to fans on Sept. 9, when the Tampa Bay Buccaneers face off against the Dallas Cowboys.

Here’s a preview of what you’ll find.

The pizza spot has four new concessions stands, two on the main concourse and one each on the east and west sides of the 300 level.

The new stand from the Tampa-based brewery is taking over the Swashbuckler Bar and features snacks, cocktails and several beers, including the Creamsicle-themed Florida Special, a signature lager brewed in partnership with the Tampa Bay Buccaneers.

Located on the main concourse, the bar will feature four Vizzy hard seltzer flavors, which will also be available at several retail locations throughout the stadium.