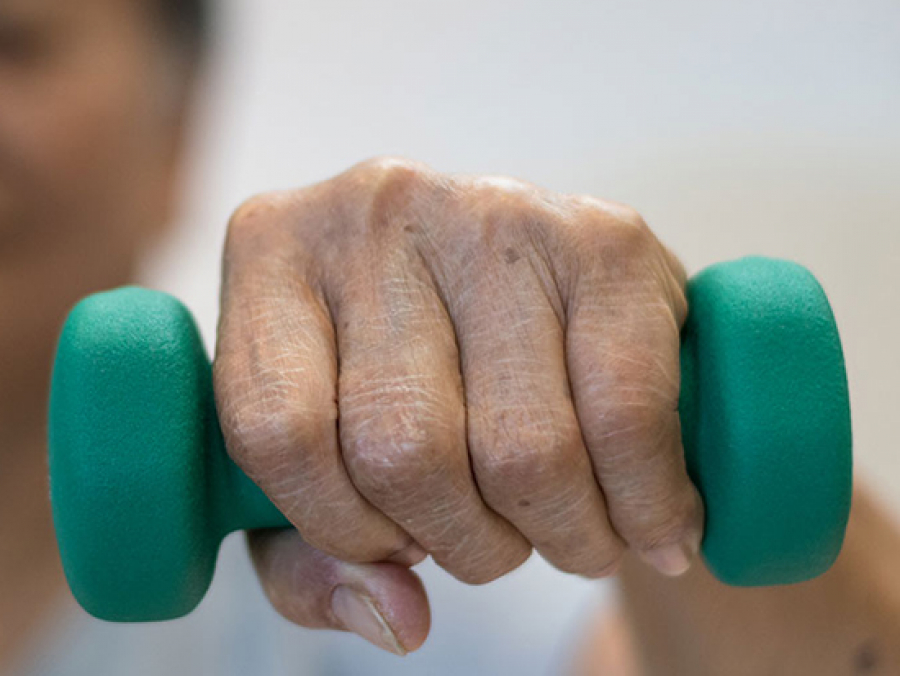 People respond to weight loss strategies in different ways, but typical studies test only one intervention at a time. UAB’s Drew Sayer is testing multiple strategies in a single study.

People respond to weight loss strategies in different ways, but typical studies test only one intervention at a time. UAB’s Drew Sayer is testing multiple strategies in a single study.When you work out, do you drop the pounds or get so hungry you only gain more? Are you one of those people who would benefit from a protein-rich diet, or should you cut carbs instead? Maybe you should add vegetables and other healthy options?

Weight-loss researchers, as do all good scientists, prefer to tackle these questions one at a time. But Drew Sayer, Ph.D., wants answers more quickly than that.

“I’m moving my research into what I would call more of a pragmatic space,” said Sayer, assistant professor in the University of Alabama at Birmingham Department of Nutrition Sciences.

Sayer is a pioneer in the field of SMART trials for weight-loss research. Sequential multiple-assignment, randomized trials “bridge the translational gap between traditional clinical research and implementation practice research,” Sayer said. “If you go in for obesity counseling and after four to six weeks you are not improving, your nutritionist would say, ‘Let’s try something else.’ That’s not what happens in a typical research study. You would be randomized to intervention A or intervention B and stay with it throughout. A SMART design builds in a predetermined timepoint when we identify participants as responders or non-responders. The responders keep going, and the non-responders are randomized to a second set of interventions.”

In other words, SMART trials are built to account for the fact that, when it comes to weight loss, one-size-fits-all just doesn’t work.

As an example, consider one of Sayer’s current studies, which he and his team call SMART Lifestyle.

“When you meet a friend and they say, ‘I’m going on a diet,’ they usually mean multiple things,” Sayer said. “They are trying to lose weight, improve the quality of their diet and starting to exercise more, all at the same time. But in reality, those are three distinct interventions: cutting calories, improving diet and increasing exercise. This study is trying to tease those apart.”

Participants are initially randomized to nutrition counseling or to exercise counseling without a major emphasis on weight loss.

“Then after eight weeks, we assess their glucose tolerance, a measure of their metabolic health,” Sayer said. “If they do not improve, then we will do one of two things: prescribe weight loss or start giving them metformin to manage their glucose.”

“When you meet a friend and they say, ‘I’m going on a diet,’ they usually mean multiple things,” Sayer said. “They are trying to lose weight, improve the quality of their diet and starting to exercise more, all at the same time. But in reality, those are three distinct interventions: cutting calories, improving diet and increasing exercise. This study is trying to tease those apart.”

“It tries to disentangle all of those separate components,” he said. “You talk to people who have lost weight and say, ‘When I exercise, the weight falls off.’ Other people say, ‘When I exercise, I get so hungry that I eat twice as much.’ People self-identify as responders or non-responders to exercise, but we don’t have any diagnostic test that can do that. The SMART design allows for that sort of testing. We’re trying to collect a comprehensive set of baseline variables to start building profiles that would allow us to prescribe precision nutrition and precision exercise recommendations for an individual.”

These baseline variables are relatively simple measures that can come from blood samples and other quick, inexpensive tests.

“If it’s not a test we can readily do in the clinical setting right now, I’m not really interested,” Sayer said. “Most of my research is in the Family Medicine Clinic at UAB Hospital Highlands, so we know, if we see something that works, the next step is to offer that as part of our clinical program.”

After studies are over, researchers using SMART designs conduct statistical modeling that “tries to retrospectively match people to the intervention they should have been assigned to,” Sayer said. “So in the future, hopefully, if we see somebody with similar characteristics, we can assign them to the intervention that will benefit them the most.”

In another study, funded by an NIH K01 award for promising young investigators, Sayer is investigating ways to combat sarcopenic obesity, a condition of too much fat mass coupled with too little skeletal muscle.

“We want to know, in people 50 and older, if we can induce weight loss while preserving fat-free mass, much of which is skeletal muscle,” Sayer said.

“When people are losing weight, they are not just losing fat,” Sayer said. “Anywhere from 25 to 30 percent of what they lose is skeletal muscle. When you are 35 or 40 years old and have obesity and lose a significant amount of body weight, the small amount of skeletal muscle you lose isn’t a problem. But if you have sarcopenic obesity — low muscle mass with obesity, which is really common in people 60-plus — you really have to think about the pros and cons of weight loss in that group. If they lose weight and lose too much skeletal muscle, they can have functional impairments.”

“In the PRESS ON, or Protein and Resistance Exercise to Stop Sarcopenic Obesity Now study, we are looking at the two most common strategies to do that — high-protein diets and resistance exercise training,” Sayer said. Previous studies and clinical experience have shown a variation in response.

“Some people respond well to resistance exercise and others to diet, but there is no test to figure out which is which,” Sayer said.

(Photography: Andrea Mabry)His study begins by randomizing participants to either a high-protein diet or resistance exercise. Both groups are starting as counseling-based interventions, Sayer says. They do that for eight weeks; then, if they lose a certain amount of fat mass and do not lose too much fat-free mass, they are classified as a responder and stay with the intervention.

“We are only picking strategies that have shown some effectiveness beforehand,” Sayer said. “We know resistance exercise works, but at what level and for whom? We start with counseling interventions, which are the easiest and cheapest to scale. We reserve supplement strategies and personal training for those who don’t respond.”

‘How to actually treat obesity’

Sayer is just beginning a third SMART study at the Family Medicine Clinic in people with pre-diabetes.

“One common strategy to lose weight for this group is by reducing carbohydrate intake,” Sayer said. “The initial interventions will be either low-carb or low-fat — not ketogenic-low, but moderately reduced.” After four weeks, those who have lost enough weight will continue, while the non-responders “will get supervised exercise or follow early time-restricted feeding,” Sayer said. (The latter refers to eating all meals within a specified time frame each day, such as 8 a.m. to 2 p.m.)

It is important to note that the participants in Sayer’s studies are dealing with all the associated conditions seen in people with obesity.

“I’ve read so many research papers that have conducted research in people with obesity but who are otherwise healthy,” Sayer said. “You read in the introductions to those papers that obesity is associated with all these chronic diseases and metabolic disruptions, but then they go ahead and study people who don’t have any of these conditions. It’s one of my biggest pet peeves in clinical obesity research because it excludes the people who would benefit most from weight reduction.”

“We are specifically recruiting people with weight-related complications — high blood pressure, high cholesterol, pre-diabetes,” Sayer said. “I want to study the people I want to intervene on. You want to be informing your eventual clinical practice. A clinical practice won’t deny someone entry into a clinical program because they have diabetes. That’s exactly who you want in those programs. But to answer scientific questions, we often exclude people.”

“That was where I was introduced to this concept of translational science — how to do research that can lead to more actionable items with regard to treating obesity,” he said. He worked as a postdoc with James Hill, Ph.D., who is now chair of the UAB Department of Nutrition Sciences and director of the university’s Nutrition Obesity Research Center. After Hill came to Birmingham, he recruited Sayer.

“To me, the central underlying theme of a SMART design is bridging that translational gap between clinical research and implementation science,” Sayer said. “A lot of good research dies at that stage and doesn’t make it into a clinic. That’s what we’re trying to do; say, ‘If this works, now what?’ We need to actively be working to move from one stage to the next.”

To find out more about Sayer’s trials and inclusion criteria, call 205-975-4113 or email [email protected]