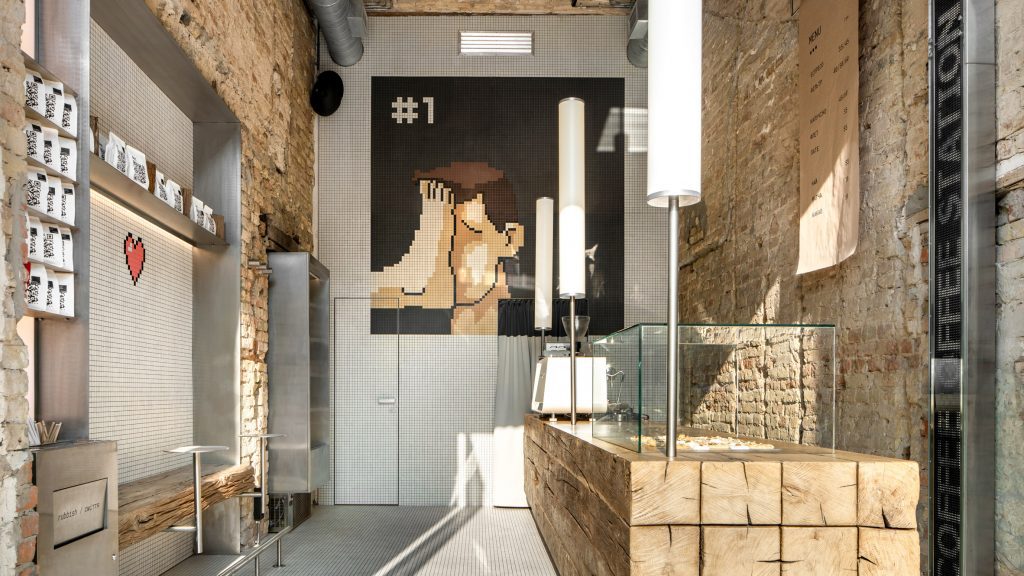 DOT Coffee Station in Kyiv by architecture and design studio YOD Group features an interior with “weird, sincere and universal” mosaic tiles arranged to look like pixels on a screen.

The Ukrainian coffee bar is located in central Kyiv on a street close to Bessarabska Square, one of the city’s liveliest intersections.

YOD Group wanted the diversity and fast pace of the cafe’s setting to be reflected in its design.

Specifically defined as a coffee station rather than a coffee shop, DOT is a narrow, hole-in-the-wall-style bar designed for people to grab a drink while on the go. Sliding glass doors form a “transparent facade” that is intended to invite people in.

YOD Group describes the coffee bar’s standout feature as the large street-facing mosaic that greets customers on the wall, which is designed to resemble pixels on a digital screen.

The mosaic’s quirky image depicts a person doing a “footpalm” gesture rather than a facepalm, which Bonesko said intends to be relatable.

“We deliberately chose not to convey any hidden messages in the picture, but instead wanted to create something weird, sincere and universal,” explained Bonesko.

“The mosaic’s graphic is pure emotion – the kind of emotions that a regular city dweller would experience several times a day. The sentiment that throws them off their stride and unsettles them. The image looks like a facepalm, but stronger.”

Created from tiles by Portuguese company Cinca, another mosaic resembles a pink heart emoji. It is displayed above the small seating area, which has stainless steel stools to match the fridge and other metal accents.

DOT’s notable features also include a narrow screen with scrolling text that snakes from one wall to another across the floor, adding to the coffee bar’s digital theme.

“Our project is about vibrant city life, and all our customers belong to that life,” concluded Bonesko. “Every guest is like a pixel in the bright puzzle of Kyiv.”

Founded in 2004 by Volodymyr Nepyivoda and Dymtro Bonesko, YOD Group is an architecture and design studio that specialises in hotels, restaurants, cafes and bars.

The photography is by Andrey Bezuglov.